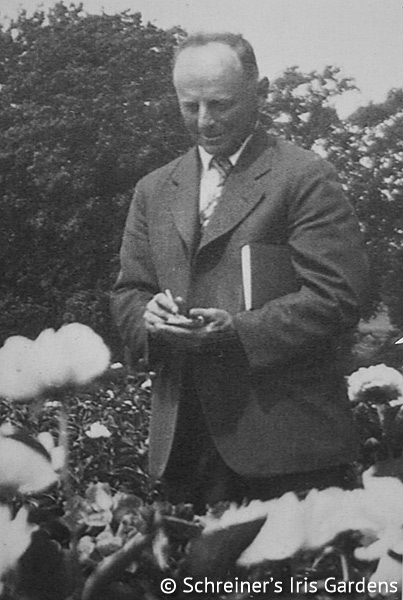 A chance encounter may not necessarily be a sign of fate, but with the benefit of a century’s worth of hindsight, it’s hard not to think it might be just that.

In 1920, a purchaser for a department store in St. Paul, Minnesota headed east on routine business. Already an avid gardener, F.X. Schreiner’s business trip was to include a coincidental meeting with a certain John C. Wister, the first president of the recently founded American Iris Society. The chance encounter with Wister left its mark on Schreiner, and soon sparked a love affair with iris that was to last the rest of F.X.’s life. Indeed, shortly after his fortuitous trip east, Schreiner found himself a serious iris collector. And before long, and many imported irises from Europe later, Schreiner had amassed over 500 cultivars and had begun to pass his “love affair” with iris down to his children.

By 1925, F.X.’s appetite for acquiring the latest iris had grown to the extent that he published his first price list using the name of Schreiner’s Iris Gardens. His first catalog, in black and white with no pictures, was to follow three years later.

In 1931, F.X. passed away. But seeing the potential in what was initially born from their father’s mere hobby, F.X.’s three children, Bob, Connie, and Bernard (Gus), eagerly assumed the reins of the burgeoning business. On the advice of their late father, the Schreiner siblings also began looking for a more hospitable climate for growing and cultivating iris. After poring over USDA yearbooks, and shipping iris around the country to test growing conditions, the Schreiners narrowed in on Oregon’s fertile Willamette Valley as an ideal location for their new business. Providing excellent soil, ideal climate, and a close proximity to transportation, the valley’s offerings were unmatched. In 1947, the Schreiners finally left the unforgiving Minnesota climate behind and settled in the central Willamette Valley, just north of Salem.

With the conclusion of the second world war, the three Schreiner siblings turned their full attention to growing their retail business on the original 15-acre Oregon parcel. The first year in Oregon brought the 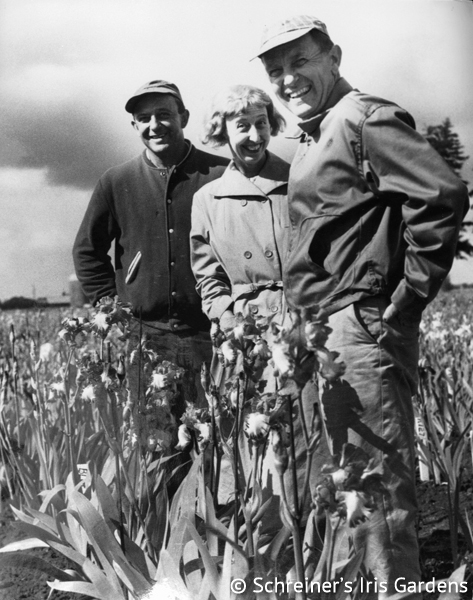 appearance of the first color catalog, helping to expand the reach of the Schreiner’s name and business to a wider customer base. As the business continued to grow Connie took to managing the business affairs of the office, Bob wrote the annual catalog and assisted in the breeding program, while Gus focused on hybridizing and running the crews necessary for digging and shipping of each year’s orders.

Freed of the devastating spring storms of Minnesota, which habitually threatened to wipe out an entire year’s worth of breeding efforts, the Schreiner hybridizing program took off after the move to Oregon. The efforts of Bob and Gus soon began to attract the attention of the American Iris Society. In 1953, Gus won the first Dykes Memorial Medal for his cultivar Blue Sapphire. Bob was to win a Dykes of his own in 1957 for Amethyst Flame. In 1968, Schreiner’s as an enterprise won its first Dykes for the 1964 introduction Stepping Out. A stunning violet plicata for its time, Stepping Out remains a best seller to this very day. Another notable Schreiner’s Dykes was the 1992 winner, Dusky Challenger. A beautifully formed dark purple, Dusky Challenger remains to this day a favorite of American Iris Society members and iris novices alike. In total, the Schreiner hybridizing program has won an impressive eleven Dykes Memorial Medals, its last coming in 2003 for the cultivar Celebration Song.

Coincidently, Schreiner irises have also won numerous John C. Wister Memorial Medals, an award taking its namesake from none other than the very same John Wister who first introduced F.X. Schreiner to the allure of iris back in 1920. Schreiner’s last Wister winner came in 2017 for the aptly named Black Is Black.

By the 1970s, two transformational changes helped send Schreiner’s toward new horizons. First, huge national nurseries began inquiring about enormous numbers of bearded iris. This new wholesale demand saw an explosive growth in the business. The original 15-acre plot soon expanded to 50 acres, then 100 acres, and ultimately all the way up to 200 acres of bearded iris in cultivation. This dizzying expansion was accompanied by a generational transition in leadership.

In 1971, Connie passed away. Gus was to follow eleven years later. Bob died in 2000. Stepping into their place to manage the company was the third generation of Schreiners. David Schreiner, Bob’s son, entered the business in the 1980s and assumed responsibility for business matters and the catalog. Ellen (Schreiner) Abrego, Bob's daughter, worked in greenhouse stem culture from 1985 - 2000. Tom Abrego, David’s brother-in-law, served as the comptroller. Gus’s sons Ray and Steve Schreiner also entered the business at this time. Ray took over the hybridizing program and managing the outdoor crews. Steve oversaw the fulfillment of retail orders and catalog photography. By the 1990s, Gus’s daughter Liz (Schreiner) Schmidt and her husband Leonard had entered the business. Liz managed the office, while Leonard helped with general maintenance (Leonard retired in 2019). In 2011, David and Tom retired. And in 2016, Ray’s son Ben Schreiner became the fourth generation to enter the business, working in many areas including iris breeding, as well as restarting the daylily program.

Today, Schreiner’s has just over 100 acres of bearded iris under cultivation. A combination of ever more mechanized planting, which makes for more densely planted fields, along with a changing wholesale market, have steadily brought the acreage down from its high of 200. The rise of Internet sales on the retail end of the business has also brought profound change, as online sales now far outpace mail and phone orders. With this in mind, Schreiner’s in 2019 discontinued two of its three print catalogs, focusing even more on growing web-based sales. 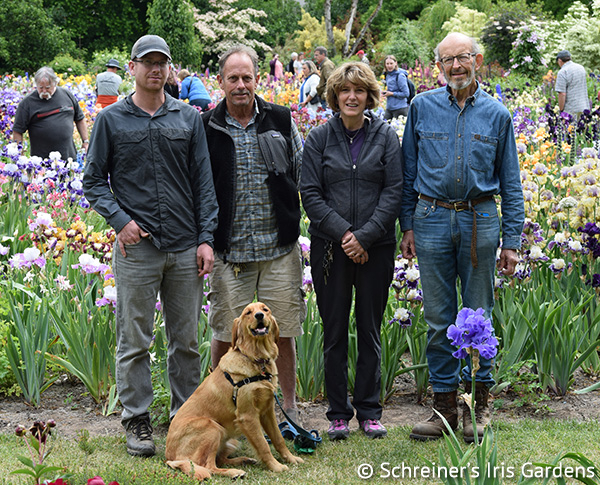 Remaining a centerpiece of the Schreiner’s enterprise to this day is its stunning 10-acre display garden. Fully developed in the 1990’s, the display garden sits atop the original Schreiner parcel first purchased in 1947. The breathtaking garden and surrounding commercial fields see tens of thousands of visitors from the Willamette Valley and beyond descend upon Schreiner’s each May. It’s a pilgrimage F.X. Schreiner would surely marvel at if he were alive to see it. What he would give, he once remarked, to see but one more bloom season.

Fate or not, it’s remarkable to consider the lasting effects of a traveling businessman’s century-old chance encounter.